What does this mean? It means that the earnings structure of Starbucks’ loyalty program has undergone a makeover: Customers currently receive 1 star per visit (and 12 stars = 1 free drink). As of April, customers will earn 2 stars per $1 spent (and 125 stars = 1 free reward). The result? Customers who typically spend less than $5 when they visit Starbucks will earn rewards (free coffees, etc) more slowly than before — it will take about $62.50 worth of purchases to become eligible for a free item, whereas it used to cost as little as $24 ($2 for a tall drip coffee * 12 transactions). Customers with a higher average order value (>$5) will earn rewards more quickly, as they will get “credit” for their higher average order value. This is meant to reward customers based on how much they contribute to the bottom line, regardless of how often they transact at Starbucks. 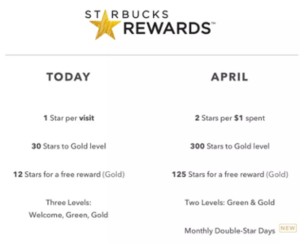 Source: Starbucks According to Starbucks Chief Strategy Officer Matthew Ryan, the vast majority of their customers will earn rewards more quickly with this change, while a minority of customers will have to wait longer to receive their free item.

Starbucks customers who typically purchased more than one item at a time will earn rewards more quickly under this new program. Starbucks walked through a few different scenarios on their “more stars” website:

Source: morestars.starbucks.com In addition to more stars, there’s another compelling benefit here: “Transaction splitting” will be obsolete. While providing customers with great service is an undeniable component of customer loyalty, service was suffering under Starbucks’ old program. Since stars were awarded per transaction (1 transaction = 1 star), customers seeking to game the system were effectively incentivized to split up multi-item orders to acquire stars more quickly. The result? Cashiers had to ring up their items separately for customers when they asked, which increased transaction time (and cost!) for Starbucks. The incentive to split up orders is effectively removed in a spend-based program, where customers are rewarded based on the amount they pay, not the number of transactions. On one level, this is a good thing: Starbucks can eliminate rewards fraud, speed up lines, and decrease transaction costs. However, that’s not how all customers are taking the news…

There’s a compelling narrative here: Starbucks is betraying its everyday coffee loyalists in favor of those who spend more. Customers lashed out on Twitter, bemoaning the changes as out of touch with customer needs.

Source: Forbes.com A lot of what’s being said is true: some frequent coffee drinkers will see less frequent rewards under this system. This is hard to defend for Starbucks: Big, impersonal coffee conglomerate wants to take away the loyalty benefits they’d promised to their faithful customers! However, considering that Starbucks’ loyalty program boasts upwards of 11 million users, it’s unsurprising that at least a small percentage of these people are sounding off. But wait, 11 million users of their loyalty app… that’s amazing. In terms of loyalty, providing an exciting app experience is a great way to retain customers. Starbucks counts over 6 million transactions per month on its Mobile Order & Pay app, where loyalty program customers can order ahead and pay via app. Since customers must be members of Starbucks’ rewards program to utilize this feature, this creates a huge incentive to stay involved in the program, even if users aren’t getting free drinks as often. Loyalty programs that actively put time back into consumers’ days add value without having to give away the farm. Time is currency when it comes to loyalty programs and customer experience. The negativity will fade in time (internet coffee activists always find some other first world injustice to get mad about). The larger issue is that Starbucks could lose some of their high-frequency, lower value customers, which could potentially make up a good chunk of their recurring business — but only if they perceive the value of rewards at other coffee brands as greater than the value they get from the Starbucks app’s functionality.

The Ugly: Starbucks has done the math, and they’re not worried about low-value defectors

As soon as the announcement was released, a million so-called “former Starbucks customers” took to the internet to denounce the company, pledging their business to competitors like Dunkin’ Donuts or Peet’s. This brings up an interesting question about the psychology behind “loyalty” programs: when you’re giving away product for free, are you really building loyalty, or are you just catering to deal-seekers? Recall “The Groupon Effect”: As soon as businesses began discounting via Groupon offers in order to attract new customers, the number of complaints received by those businesses skyrocketed. When people pay less for things, they tend to value them less. What does this mean for Starbucks? Here’s the harsh truth: The customers who are spending $2 per transaction but expecting a free coffee every 12 visits might not actually be that valuable to Starbucks. The loyalty program they had in place, even after years of awarding these customers free drinks, didn’t do much to establish long-term loyalty — look at how these low-value customers balk at the smallest change to the program. What Starbucks realizes is that it might be time to fire these customers and move focus on cultivating relationships with more profitable customers.

Starbucks didn’t have a loyalty program; loyalty implies a solid relationship between a consumer and a brand. What Starbucks had before was an incentive program, where customers would try to game the system in order to score free food and drinks. A healthier brand-consumer relationship would focus on deepening communication and strategically gifting product rather than throw free product at the problem (Shoutout to Chipotle, who recently tanked their margins by indiscriminately sending free burritos to the entire United States in an attempt to get people into their stores again). The major takeaway here is that by priming people to receive free stuff every 13th time they walked through the door, Starbucks created a relationship based off of expectation and giveaways, not true brand loyalty. They only tracked people based on one metric: # of visits, which resulted in a rewards program that lacked sophistication, targeting, and profitability (how do I know? because they changed it). The move towards rewarding their higher-spend customers is a great way to differentially target VIPs, and it marks the beginning of a program based on building true long-term loyalty for Starbucks. Now, go forth and earn some stars!